I had one fine day and quite an amazing week.  I’m very proud to share this article with you that tells just part of the story. 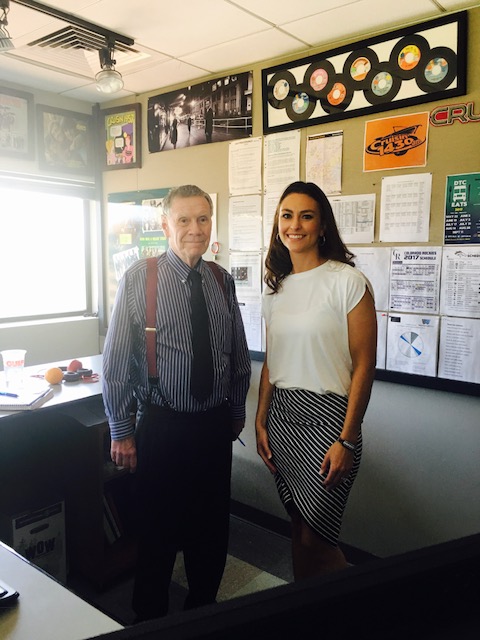 The contrast between the two could not be any greater, yet both share the same passion for food.  It was a unique opportunity to be a fly on the wall as I sat beside them listening to a back and forth discussion on the similarities and differences of broadcasting food news of the past, present and future.

Most everyone who lives in Denver knows of Warren Byrne and his popular radio program, The Restaurant Show.  Now in its 39th year, and heard Saturdays from 11am-2pm on Cruisin’ 1430 AM, the show is the longest running program of its kind in Denver.  A stalwart on the local radio scene, Byrne’s legacy began unglamorously as a volunteer entertainment broadcaster in Boulder, which eventually led to a fulltime career centered on the food scene.  Station acquisitions from various media entities would move Byrne from one station to the next; however, one constant would remain, Warren Byrne’s Restaurant Show would go on.

“Radio was the original social media,’ said Byrne, as he commented on the fact that his dialog with callers into the show is one of social interaction. His show features an open discussion of the hottest new restaurants with callers weighing in with their opinions. Listening, I realized that something can go viral on the radio as easily and quickly as it can on the internet.

Byrne is a wealth of knowledge on the Denver food scene and his experience with broadcasting food news is second-to-none.  I have personally known him for several years and am always amazed at the passion he portrays when discussing restaurants, recipes or even current events.

On the other side of the table sat Lonnie Metzler, a native Denverite who moved out to the country and is now enjoying a rural life on the prairie. With a Master’s Degree in Food Science from Colorado State University, Metzler is certainly an expert in the food industry. However, it is her talent for writing which brought the initial introduction into place. With the recent launch of her new food blog titled Farm Wine Dine, it seemed only fitting for me to introduce the two. If nothing more than to satisfy my own personal curiosity to see the interaction between two vastly different foodies, with exceedingly different backgrounds, and completely different means of communication to their extremely different audiences.

Surprisingly, I found that both shared many of the same ideals, most notably on how often today people don’t sit down together to eat and converse about their daily lives like they used to.  Instead, many are seen on their phones while eating together in a restaurant or at the dinner table, checking in on social media and losing the opportunity to authentically communicate with each other.  The opportunity of breaking bread has somewhat been lost with the advent of smart phones, yet both Byrne and Metzler share the same passion of bringing back that tradition through communicating to their respective audiences the importance of fully enjoying the dining experience with others seated at the table.

While Byrne isn’t ready to retire just yet, I could almost imagine the baton being handed off from an old guard to a newbie. Radio is not dead nor do I believe it ever will be, it just has a lot more competition these days, specifically with social media. It is refreshing to see that regardless of the platform for communication, the same values are shared across generations.

I left the meeting more enlightened and reminded of how cyclical life can be.  The form of communication may be changing; however, the human condition never does.

To learn more about Lonnie Metzler, visit her blog at http://farmwinedine.com

Stay tuned to find out what happened next.

One thought on “One Fine Day”