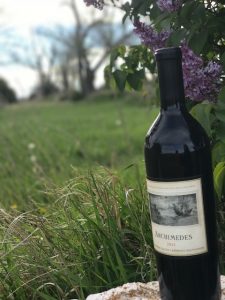 The beauty of living in the country is that I get to take really awesome pictures of ordinary things. It is fun to play around with what’s outside and create semi-professional looking pictures.  I mean, come on, look at how amazing this picture makes me look.  Haha!  I am no professional photographer, but I like to pretend that I am. 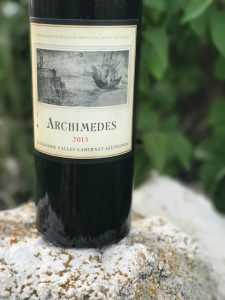 Anyway, this particular bottle of wine is special. I wanted to give you a taste of something that I find quite outstanding.  The Archimedes 2013 Cabernet Sauvignon, from the Francis Ford Coppola Winery, is an impressive wine!  It is a powerful Cab that delivers flavors of blackberry, currant, black pepper and cinnamon.  At $85 and 91 points, it is a splurge and something that you may want to save for a special occasion.

The back of the bottle reads, “The discoveries of the Greek mathematician Archimedes nearly 2,000 years ago established laws of physics still used today.  One of his many invetions was a mirror used to reflect the sun, setting the attacking Roman navy afire.  Francis Coppola’s grandfather Agostino greatly admired the intellect and ingenuity of the mathematician and insisted his first son be named for him.  This wine is made in honor of Francis Coppola’s uncle Archimedes, and is the flagship wine of Francis Ford Coppola Winery.”

You could pair this wine classically with a steak or pasta Bolognese.  But, if you want to do something out of the ordinary, try it with an Asian chicken salad.  No matter how you serve it, the 2013 Archimedes Cabernet Sauvignon will excellently satisfy your palate.

To find out more about the Francis Ford Coppola Winery, visit their website at www.francisfordcoppolawinery.com

Leave your comments and questions below. And, if you have a wine you’d like to review, send it my way!  I’d love to hear from you.  Until next time, cheers!